SiteGround vs DreamHost 2022: Choose better WebHost for your website?

For ensuring the proper functioning of your website, you need good web hosting. In the current scenario, there are a lot of platforms that are offering this service. Out of all these, the two leading ones are SiteGround and DreamHost. Both of these have been offering this service for many years and choosing one between them is a bit complicated task. And to guide you for the same we are going to do SiteGround vs DreamHost comparison. We will do this comparison on the basis of primary and secondary features offered by these platforms.

In this comparison between SiteGround and DreamHost, we will look into various aspects of both these hosting in details. Let’s start with the company background:

SiteGround is one of the greatest players in this field and is serving since 2004. It is based in Bulgaria and was founded by Ivo Tzenov. It has servers in four continents and has a global presence. Currently, it has a team of 500 individuals who have served millions of users globally. Also, it is considered to be a great web hosting provider for personal website.

On the flip side, DreamHost is one of the oldest hosting providers and was founded way back in 1996. It is headquartered in Los Angeles and operates as a privately held company. It is operating in more than 100 countries and at present has 400K+ users and also claims to have hosted more than 1.5 million sites till now.

Comparison of SiteGround and DreamHost

There are a lot of Web-hosting types that have emerged over time. Both of these platforms provide different types of plans. And all these plans have some sub-plans differentiated on the basis of features and pricing. So we have discussed the features of only starter plans for both the web hosting companies.

This is the very basic kind of hosting and is available on both platforms. In this type, various users share the same server for staging their website.

Both the platforms supply almost the same features in this type of hosting. However, there are some areas like storage and visitors where DreamHost is ahead of SiteGround. So, we can conclude that in shared hosting, DreamHost has an edge over SiteGround.

It is also a kind of shared hosting but is way different than basic shared hosting. In managed WordPress users get pre-installed WordPress on their website. Also, all the technical tasks are managed by the hosting provider. This helps in optimizing servers according to WordPress which directly benefits the sites.

DreamHost provides more storage space than SiteGround whereas with SiteGround you can get free emails and CDN. Apart from these, both the web hosts provide almost identical features for Managed WordPress Hosting.

This type of hosting is designed with a view of promoting online stores. This is also a type of managed WordPress but it includes a pre-installed WooCommerce Plugin. With the help of this, you can create an online store very easily.

For setting an online store, the most important thing that one should look for is the number of visitors allowed. SiteGround limits your monthly visitors to 10K but with DreamHost, this limit is up to 100K. DreamHost also provides 3 times more space than SiteGround. However, the only thing DreamHost lacks is free CDN.

This type of hosting is suitable for small businesses as it provides you with a dedicated space over a server having multiple users. SiteGround doesn’t provide you with this type of hosting and you can only find DreamHost VPS Hosting. Besides, DreamHost provides huge discounts during Black Friday sale and became the main reason for us to include it in our list of Best VPS hosting Black Friday deals.

With this type of hosting, you can borrow an entire server for hosting your site. This option is only available with DreamHost as SiteGround doesn’t provide this kind of hosting. 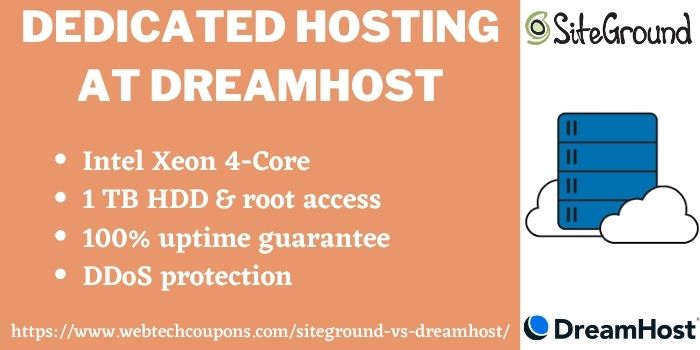 From these features, it is clear that in cloud hosting, SiteGround is way ahead of DreamHost.

So, this was the head to head comparison SiteGround and DreamHost of hosting plans. But there are some secondary features too that are as important as the above-mentioned features were and that are discussed further in the article.

There are some basic things that a good web host should provide. We have picked some of those things and will see which platform fulfills these better.

Which is better DreamHost or SiteGround?

In this article, we did a detailed discussion on the major features of these two platforms and now it’s time for making a final judgment.

And from the above-done comparison of SiteGround vs DreamHost, we can easily state that the Winner is DreamHost.

In every kind of hosting, DreamHost is a step ahead of the SiteGround except in cloud hosting. DreamHost also deals in VPS and Dedicated hosting whereas SiteGround doesn’t. So, all of these points justify our decision that DreamHost wins this battle.