These are top plans at Norton and Bitdefender with some advanced features and technologies. In this article, we will do a performance comparison between both of these antiviruses based on malware protection, speed, user experience, and affordable prices.

But first, let’s check out some major features and qualities both of these antiviruses have for better protection and security.

Norton 360 Deluxe is the one of the better options available at Norton. However, it is the most popular plan with some quality features and functions. And also it is cheaper than Norton 360 Premium. They both have similar features.

This plan has various key features like Real-time Threat Protection which protects against cyber threats and malware be it already existing or upcoming online threats. This is how it protects your private and financial information. 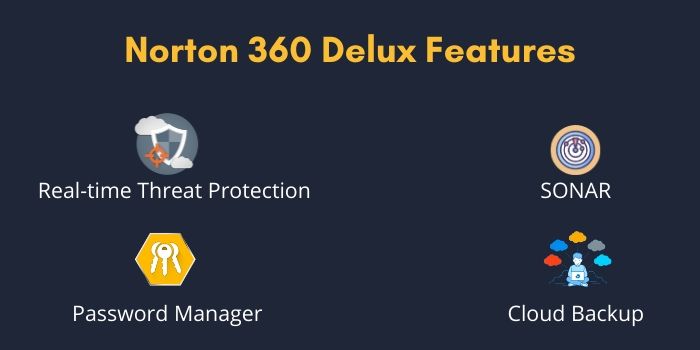 1. The parental control feature lets you control and monitors the online activities of your child. This is how you can protect them from cybercrimes and threats. It has SONAR feature that analyzes the files and apps based on their behaviour.

2. The SafeCam features let you know about the attempts to access your webcam so that you can block all the unauthorized access to your webcam.  This feature has become very important of late s more hackers try to access video through user webcam.

3. You get a Password Manager feature that lets you generate some strong passwords. You can create one master password through which you can access all the accounts.

4. The Secure VPN with this plan also a good feature that hides your IP address and lets you do safe online payments and other activities. It comes with bank-grade encryption that protects your computer from all the cyber attacks.

5. And finally, you get cloud backup in which you can store up to 75 GB data for future safety. In case your PC or Laptop gets affected by malware or ransomware or it got stolen or damaged then you will not lose your important files and data with cloud backup.

And this plan gives you protection to up to 5 devices (Windows, Mac, iOS, Android,etc.).

You can get a complete Norton Antivirus Review 2020 here. 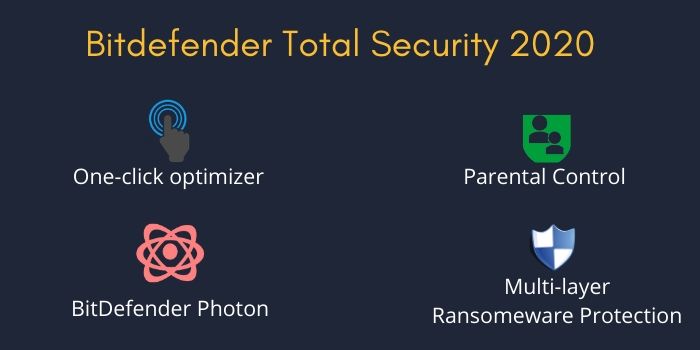 BitDefender Total Security 2020 is one of the most complete Antivirus suite that you can get for your PC’s security. It protects your PC or laptop way beyond any virus or malware. It has various quality features that offer you top-class performance and help achieve better results against online threats.

The Bitdefender Total Security 2020 has two plans one for 5 devices and second for 10 devices. The prices of both are different, however, the rest features are the same. You can use this antivirus software on Windows, macOS, iOs, and Android.

1.One of the main qualities of this antivirus is that it is very easy to install and use. That is why it has a user-friendly interface. You can reset and personalize the way it fits you the best.

2. It has Device Optimizer, Parental Control, Multi-layer Ransomeware Protection, Password Manager and many more features in order to give you ultimate security.

It is no brainer that Bitdefender Total Security 2020 has more features and better security than Norton 360 Delux. But how do we know the performance of these features? And if there are any issues that users face while using both of these top Antivirus software.

Let’s compare both of these products based on their performance, user experience, pricing & plans, and popularity. 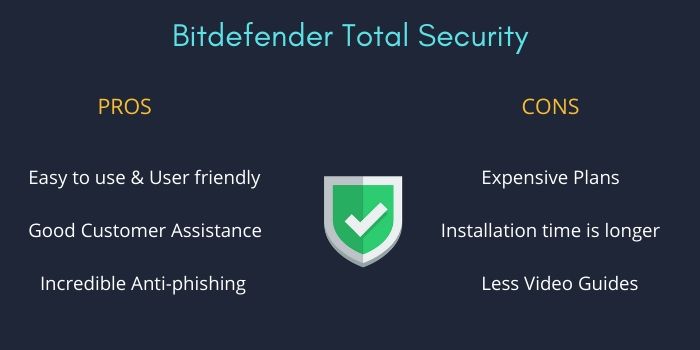 Malware protection is the first reason you think of purchasing antivirus software. Malware Protection is the backbone of any Antivirus. If it doesn’t provide strong malware security and can’t update itself with new emerging malware then that software can’t survive in the market for long.

Let’s see if Norton 360 Delux has better malware protection or Bitdefender Total Security 2020 wins the battle. When we talk about malware protection there are two key factors to keep in mind. First, the perfection rate and the second false-positive results which mean that antivirus scans a malware file as a clean file.

Norton 360 Delux has a very good perfection rate. It has some advanced features like SONAR and high-quality encryption which makes it clean and secure your PC against all types of malware. However, there is only one common problem came out during a lot of expert experiments. That was it gives a lot of false-positive results. That means it clear a malware file as a clean file by mistake.

On the other hand, the perfection rate of BitDefender Total Security is also very impressive. And what makes it more efficient is that it has a very low false-positive results rate. It got the Best Protection 2019 Award by the prestigious AV-TEST Institute.

This is very we can give Bitdefender an edge over Norton. 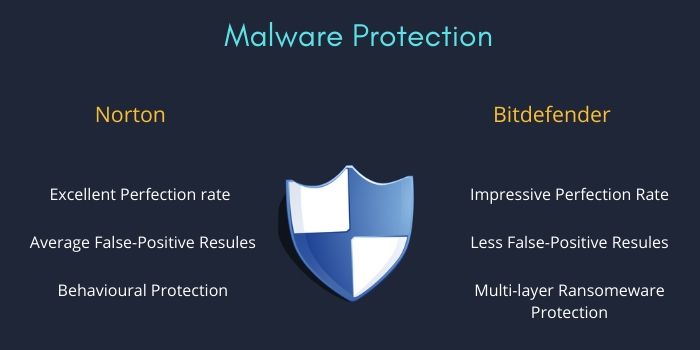 The second most important thing to watch out for before buying antivirus software is to make sure it will run smoothly with great speed.

Norton 360 Deluxe is very fast when it comes to scanning. It is one of the fastest antiviruses when it comes to speed. However, the secure VPN with it can compromise your speed. When you use the Norton VPN your speed goes down. And second things that it takes a lot of space on your PC. Which makes other software and apps run slow on your system. This is also what impacts your speed.

Bitdefender Total Security also has a very fast scanning time. It does not take much space for resources on your PC also. It does not compromise the speed of your PC while working in the background.

Overall the speed of both of these antiviruses software is amazing. However, we have to give a slight edge to Bitdefender over Norton because of being light-weight.

The success of any antivirus software also depends on the user experience and customer feedback. It should be easy to use or should have a short video on how to use this or that antivirus product.

In this context, both Bitdefender Total Security 2020 and Norton 360 Delux are the top players. It is hard to compare when it comes to user interface and easy to use.

You get a complete user guide PDF at Bitdefender which explains to you how to install it, how to use it for windows, mac, iOS, etc. This is very good for if you stuck anywhere.

On the other hand, Norton uses short videos on how to defend your system from malware, how to detect viruses and malware, etc. And also it provides you with 24/7 customer support.

The features and functions of both of these antiviruses software are very simple to use and figure out. So in this battle of user experience and user ease to use we can say that both are neck to neck which means both are the winner here. 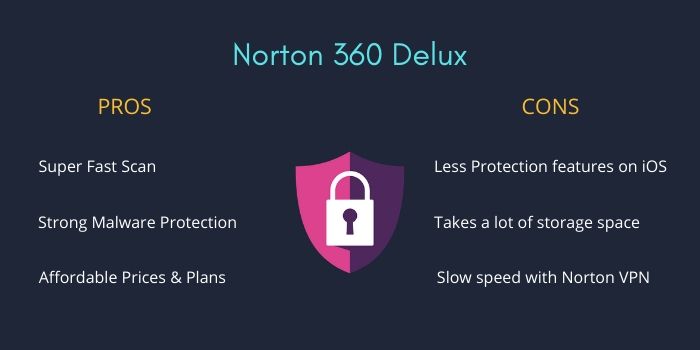 These prices and plans are directly from the official website of both of these best antivirus software.

It is clear that Norton 360 Delux is the most affordable plan for you. It comes with 75 GB cloud backup. And more other quality features.

On the other hand, Bitdefender Total Security 2020 is expensive but it comes with a lot of more features than Norton 360 Delux.

In this case, it depends on your requirements and budget. In both of the plans, you get at least up to 5 devices to use. So here it’s up to you to choose the winner.

However, Norton 360 Delux also has features like a password manager, cloud backup, safe cam protection, strong high-quality encryption, etc. And also it is a more affordable plan than Bitdefender. Overall the Norton 360 Delux vs Bitdefender Total Security 2020 is a very good comparison to know the best internet security plan in 2020.

Hostinger VS GreenGeeks 2020: Choose the Best For Your Website

Hostinger Vs GoDaddy: Which One is the Best Web hosting Provider?

Hostinger Vs Bluehost: Which one is best for You?

Upto 50% Off On All Udacity Courses & Programs

15% off eUKHost Coupon for VPS servers