Bitdefender Vs Malwarebytes 2022– Which Antivirus Is Better?

Just like internet antivirus software have also become an essential part of our digital life(more so ever because of increasing privacy and security threats). Both Bitdefender and Malwarebytes have established themselves as well-reputed cybersecurity companies. Here we put a deep-driven comprehensive comparison of Bitdefender vs Malwarebytes.

Both security products have some differences in their features and performance. At that intent, in terms of malware protection, PC performance, security features  Bitdefender has an edge over Malwarebytes.

This guide will help you to make a wise decision for choosing any one antivirus software between Malwarebytes vs Bitdefender.

Difference Between Bitdefender And Malwarebytes

Before proceeding into a detailed comparison of Malwarebytes or Bitdefender first have an outlook for both the companies.

What Is Bitdefender Antivirus? 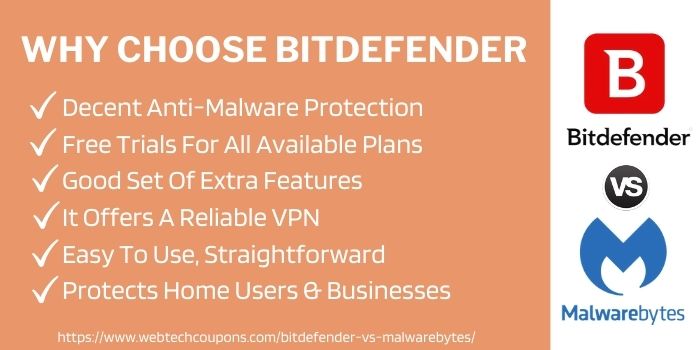 Bitdefender is one of the well-reputed antivirus software available in the market in 2022. The company provides great malware protection with advanced tools and functions in addition to more latest security protection tools.

What Is Malwarebytes Software? 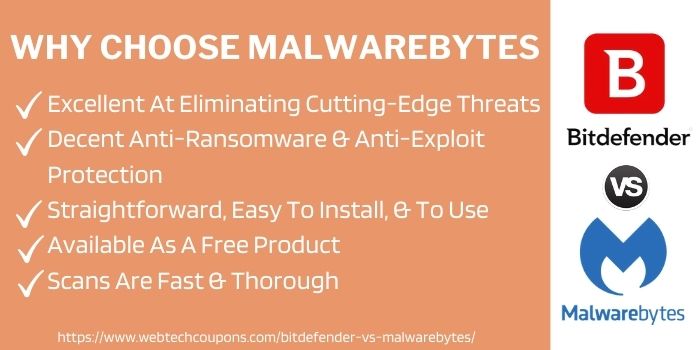 Malwarebytes is also a good antivirus software with some decent system protection tools. The company provides a secure, complete package that gives real-time protection against harmful malware or cyberthreats.

Which Is Better: Bitdefender Or Malwarebytes

Bitdefender antivirus uses single basic technology on their all products that provide almost the same level of system protection. These features include:

Malwarebytes often provides high-quality products but compare to Bitdefender it lacks in many areas.

A virtual private network is one of the most reliable and important tool of security and privacy. It offers complete ...
Starts @ $2.49/month GET OFFER
Read full review
Prices May Vary Without Any Prior Notice

Bitdefender is one of the top-rated antivirus software present in the market. It received perfect scores for performance testing done by various labs like AV-test, and so on.

According to AV-test reports, Bitdefender gets a 6 out of 6 performance score. Also, 100% protection against malware attacks. Which is a good score compared to the average industry score of 99.3%. Talking about system performance speed, then yes Bitdefender slightly slows down your device speed by 19% compared to the average industry time is by 14%.

As per the AV-test report, Malwarebyte’s performance score is 5.5 out of 6 and it gives 99.2% protection against malware attacks. Compare to Bitdefender or any other antivirus this percentage is less.

Malwarebytes also slows down a system by 22% that is more than twice the standard industry average speed.

This software is good for all operating systems, mainly windows devices. Other device users like Andriod, Mac, and iOS can use Bitdefender’s total security plan. This includes features like Internet protection, parental controls, and a free VPN.  The software is adjustable with any of your operating systems includes  Mozilla Thunderbird, Microsoft Outlook, Windows Mail, and Outlook Express. Therefore, Bitdefender has good compatibility options.

Malwarebytes software is compatible unevenly with different devices. The basic free plan of Malwarebytes is only available for Windows users. To access the latest upgraded version of Malwarebytes one must have OS X10.11, Google Chrome with Google play store, and so on. For mobile users, android 4.4 (KitKat) or iOS 11 operating system is required.

Bitdefender software has a good look and feels with a modern outlook. You can find all the necessary features and tools on the home screen. It is easy for any user to navigate their required path. Their dashboard has an option for a quick scan for your device, secure VPN, safe pay, and various other tools for your device safety.

Malwarebyte also comes with a modern outlook with real-time protection section on their dashboard. It has an attractive interface with helpful navigation tabs. A straightforward and sorted menu section is available on the site’s homepage.

Besides their major features, the software comes with many advanced features and tools. If you have kids at home then no need to worry about their browsing security. Bitdefender comes with parental control and also a webcam protection feature. The most amazing feature that the software provides is the theft protection feature. If you lost your device this feature will track the device’s locations.

Malwarebytes software does not offer a wide range of features in its simplest plans.

Bitdefender software provides a good customer support service to their users via email, telephone, and online chat. If you find any major or minor issues while using this program then you can find solutions from the Bitdefender blog section where they have a detailed solution for your problem.

Malwarebytes does not have strong customer support. They provide online chat customer support service which is not working. Their representative is unavailable most of the time. The company provides serval video tutorials and blog articles with detailed instructions to use the software. There is also an option of a forum community for posting queries and questions.

Bitdefender 60% off Coupon Code for all Type of Products 2022

Upto 60% Off Bitdefender Coupon Code for Big Saving If you want to buy the most amazing and affordable security for ...
GET OFFER
Read full review

This is the main segment of Bitdefender vs Malwarebytes comparison that shows how much this software cost.

The company comes with various offers and discounts with Bitdefender Coupon Code for their users to save a huge amount on their purchase of any of their products.

Malwarebytes For Business ( Include four packages)

Come with an Advanced features pack

In the pricing section, Bitdefender Internet Security Plan and Malwarebytes Premium are similar in their pricing but differ in devices as Bitdefender offers 3 devices and Malwarebytes offers only one device. But both products have decent pricing plans so here both software has equal potential.

Our recommendation to the users is to use Bitdefender Antivirus Software for their system protection. Malwarebytes is a decent antivirus software but it does not provide the level of protection that Bitdefender offers.

Is Malwarebyte Better Than Bitdefender?

According to our test, Bitdefender shows some prominent features and tools compare to Malwarebyte.

Is Bitdefender Good Against Malware?

As per AV-test, Bitdefender secures good points in providing secure protection against malware threats that include viruses, cyber threats, and harmful links.

Does Bitdefender Slow Down Computer?

This software has a slight effect on your device’s performance. It slows down speed by 19% which is quite more than the average industry standard that is 14%.

Kaspersky vs Avast – Who Provides Comprehensive Security in 2022

Norton VS Kaspersky Antivirus 2022 – Which One Better?

Norton or Kaspersky, want to find the best antivirus software in ? Is Kaspersky better than Norton? Or, is Norton ...
Read full review

Bitdefender is one the most famous and trusted antivirus solution and is also used by experts. It provides many ...
Read full review

Avast vs AVG 2022 – Which Is Better Antivirus

Avast and AVG technologies are one of the top-rated antivirus software available in the market. Both software arises ...
Read full review

Avast vs Norton 2022 – Which Is Better Norton Or Avast?

Using an antivirus program for keeping your PC secure against malware and other threats is a great idea. However, ...
Read full review
We will be happy to hear your thoughts

Hot Deals To Save Money: