CentOS Vs Ubuntu 2022– Which Is Better For Programming?

Do you compare CentOS vs Ubuntu 2022 for programming?

Linux is the main core distribution between Ubuntu and CentOS. Without any further ado, let us check in-depth what are the main difference between CentOS vs Ubuntu for development.

Which Is Better Centos Or Ubuntu?

Both operating systems are the most famous Linux OS available in the software industry. Ubuntu is based on a Linux distribution and an open-source operating system. It is famous among the cloud and applicable to internet-connected things.

On contrary, CentOS is based on a Linux framework and compatible with Red Hat Linux corresponding to the upstream store. To know in detail, which is better Ubuntu vs Linux CentOS follows up this comprehensive guide.

What Is CentOS Vs Ubuntu? 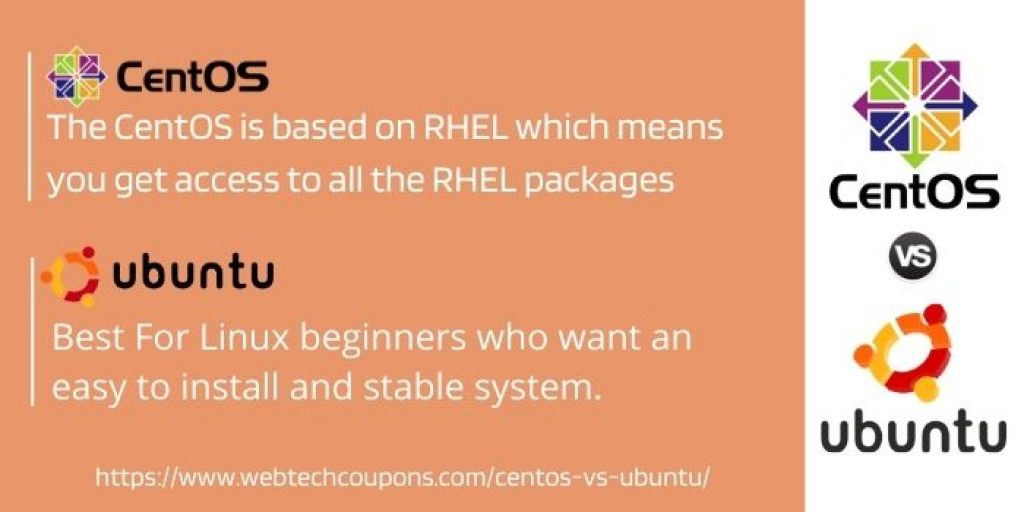 What Is Linux CentOS?

CentOS is based on RHEL and compatible with various RH software. It is a highly secure, stable, and easy-to-customize operating system. Therefore, CentOS has solid corporate-level updates that make it the most reliable OS for every IT professionalist.

What Does Ubuntu mean?

Ubuntu is an open-source and free installing operating system available in the IT industry. Linux Ubuntu is developed by Canonical Ltd released in 2004. This Operating system is mostly used by researchers or programmers. Ubuntu is also very secured and it supports full-disk encryption as well as other home and private encryption. It is a very popular operating system among cloud computing supporting OpenStack.

Below mentioned is a detailed comparison between CentOS and Ubuntu operating system.

Which OS Is More Supportive- CentOS or Ubuntu?

Ubuntu is more supportive than CentOS. As it is backed up by Canonical, therefore you can buy support contracts easily. CentOS doesn’t have any official backing up but it provides support from a thief party, namely OpenLogic that is known as support CentOS.

Software Available In Ubuntu And CentOS

Linux Ubuntu also has a wide range of tools that are used by many programmers. Some tools are restricted and only written for red hat systems. Some users go for CentOS because they find many industrial features or tools in that. So know the choice is yours which is better for you.

Which One Has Easy User-Interface: CentOS vs Ubuntu?

If we talk about a user-friendly operating system then Ubuntu always comes first in our mind. It is very easy to manage and has great GUI features.

You are allowed to run many utilities by using various command-line. It also has a large community which makes it easy to learn. Compared to other Linux operating systems, Ubuntu is a very facile OS.

Heading towards CentOS, it has quite steep learning tutorials available on the internet. It has some important tools that as Cpanel which can easily get Ubuntu in a better way. CentOS command features are a bit complicated to remember. If you don’t have any knowledge regarding this that avoid using CentOS.

Many old Linux users or developers still use CentOS for their web servers. They are familiar with red hat architecture.

CentOS vs Ubuntu- Which is Secure, Stable, & Updates Fast?

For CentOS, the support team is very small. Just like ubuntu, it does not offer any frequent updates. In this OS you need to download external third-party tools manually for accessing other software. Although, CentOS is more reliable, stable, and lightweight as compared to many Ubuntu OS.

To manage packages CentOS uses RPM packages. Also, a tool called yum was created to manage all important repositories, dependencies, and many other combinations of actions.

Ubuntu has a DEB package format along with tools such as apt that will help to manage DEB packages.

Sometimes there are differences in the availability of packages for many distributions. Thus, both operating systems are different from each other and it is obvious that both have different tools and features.

Advantages And Disadvantages Of Linux CentOS

These are the main pros and cons of Linux CentOS

Advantages And Disadvantages Of Ubuntu Linux

Compare to CentOS, Linux ubuntu has better advantages and disadvantages.

While using any operating system you may experience some technical errors listed below:

Both are Linux-based operating system that is mentioned in this comparison of CentOS vs Ubuntu. We conclude that Ubuntu is better than CentOS for programmers and developers.

Many developers still use CentOS as they have experience of using old Linux OS for their work.  IT professional uses Ubuntu for its easy user interface. Nowadays, many users are switching to Ubuntu over Windows OS on their devices.

Is CentOS Good For Beginners?

CentOS has a decent user interface that is good for new programmers or developers. Therefore, it is easy to install, before that you need to install a GUI desktop environment.

Is Ubuntu The Same As Linux?

Ubuntu is based on Linux distribution and is an open-sourced OS. You can get this software for free and easily download it on your desktop. It is not the same as Linux, instead, it is the part of Linux distribution operating system.

What Type Of OS Is Ubuntu?

It is a complete Linux Distribution OS available for free installation. The company comes with excellent community support.

Is CentOS Is Better Than Ubuntu?

Ubuntu is much better than CentOS. As both software is Linux Distribution but different in features and tools. You can also check this comprehensive CentOS vs Ubuntu comparison.
Related Articles

Fusion 360 Vs Solidworks – Which Is Better For 3D Printing, Simulation, & Rendering?

Filmora Free Vs Paid 2022: Which One Is Better?

Quicken Premier vs Home and Business 2022: Which One Is Better?